Sorry its been a while since I last updated, but whenever I’ve been in town I’ve been unable to get sufficient cell coverage to upload photos, etc. The following are things I’ve seen in Maine over the past two weeks. I’m writing from the computer upstairs in Honey and Bear’s (Marge and Earl’s) great hostel in Andover, Maine called “The Cabin.” I’ve hiked 275 miles so far and have 6 miles left until the New Hampshire border, which I will cross tomorrow. In terms of states, Maine contains the second longest section of the AT after Virginia, so covering all of it is a bit of a big deal for me. Earlier today I hiked Mahoosuc Notch, which listed as “the most difficult mile of the AT.” Basically, it was a one mile boulder field through which there is no particular trail. One simply scrambles across, over, under and through the boulders, taking off ones pack when necessary to squeeze through the gaps in the rocks. 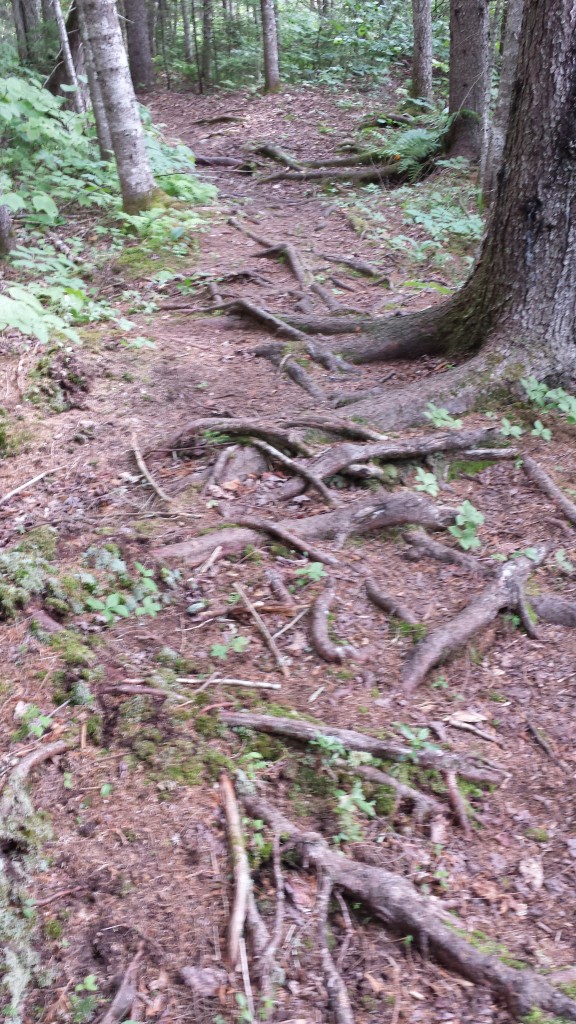 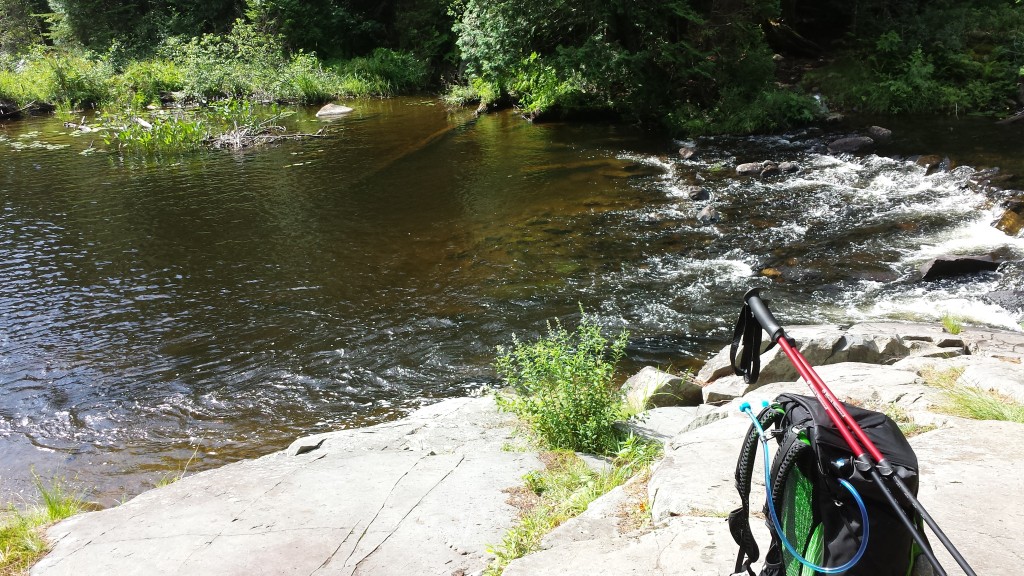 Fording rivers is another feature of the AT in Maine. That’s my pack after completing this river crossing. 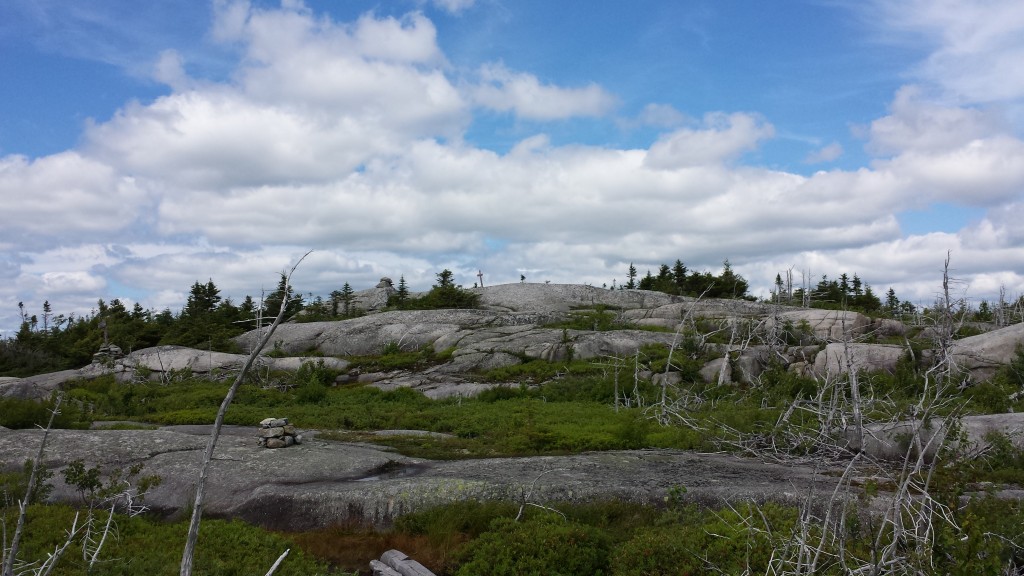 If you look carefully you can see the sign on the mountain peak in the distance (looks like a cross).

Whereas I had been mainly hiking on my own so far, about a week ago a met a few people over the course of 3-4 days that have gradually formed into a hiking group of 7-10 people we call “the Dukes of Hazard.” Our group includes men and women in their 20s, 30s, 40s, and 50s, from all over the US. We’re helping each other along while having a lot of fun together. Enjoy all these photos from Maine and I’ll post again soon from New Hampshire, probably after I make it through the White Mountains. 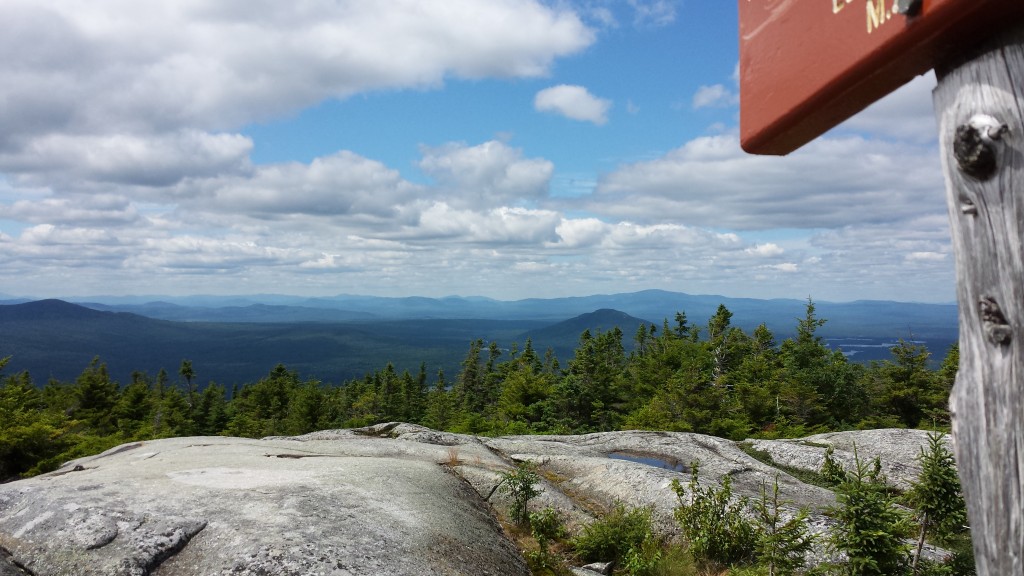 This is the view from the same peak. 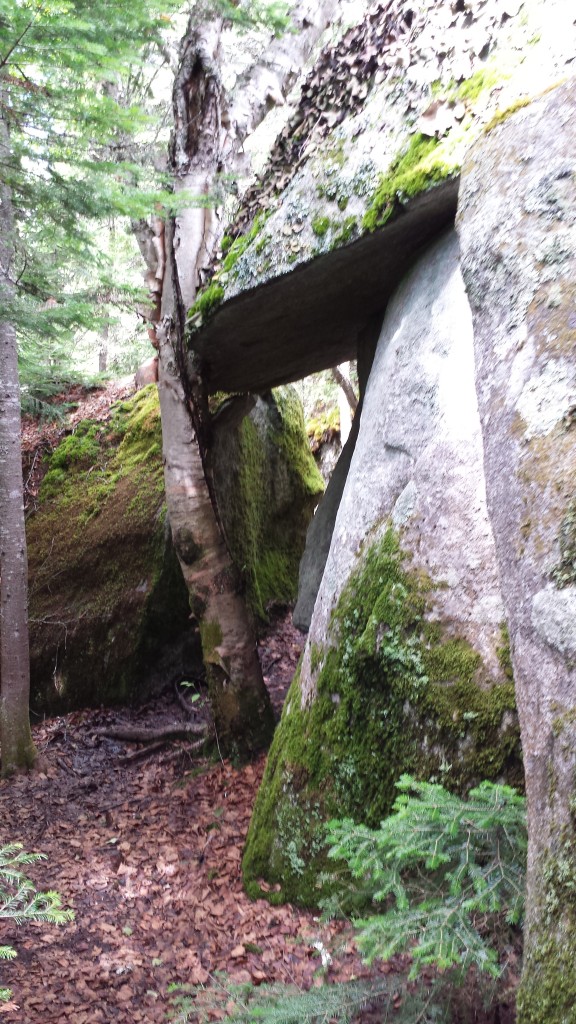 Yep, the trail goes through that gap. 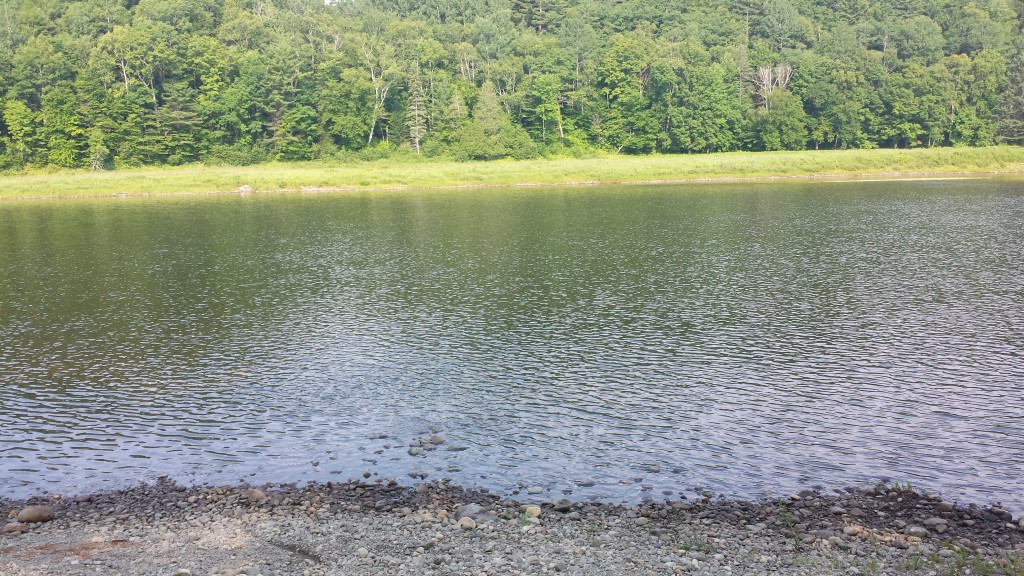 This river is too large to ford, so there is an official ‘ferry service’: Dave and his canoe. 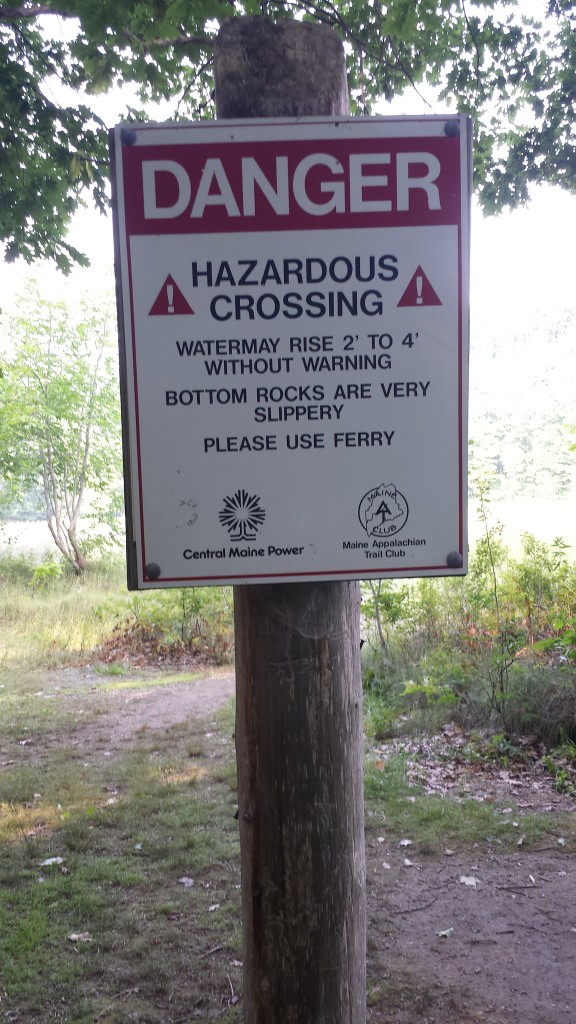 Here’s the sign warning against fording the Kennebec river. 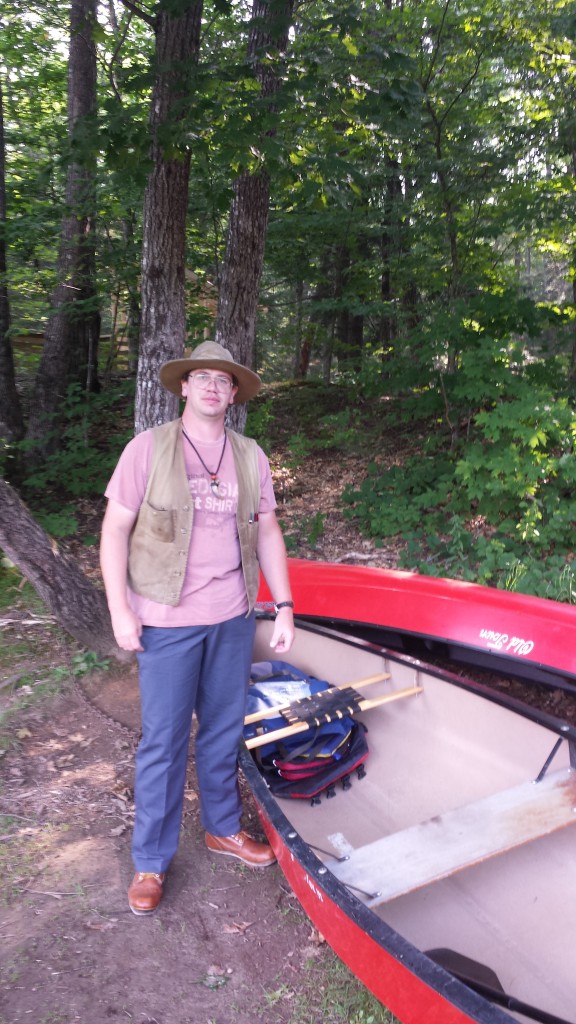 Dave and his canoe. It has a white blaze painted on the inside of the bottom! 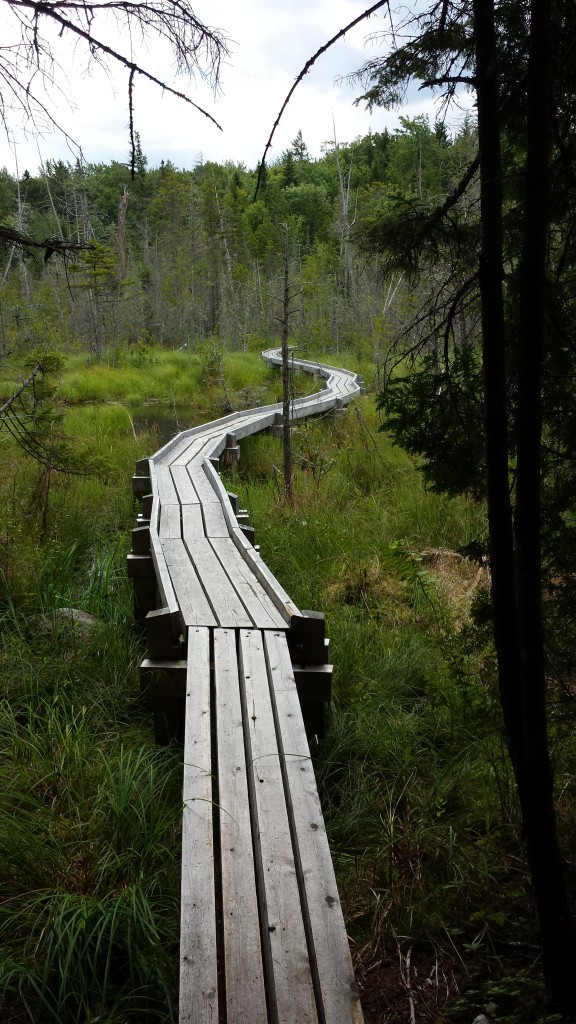 Many of the marshiest areas include walkways for hiking, though most are not in as good a shape as this one. 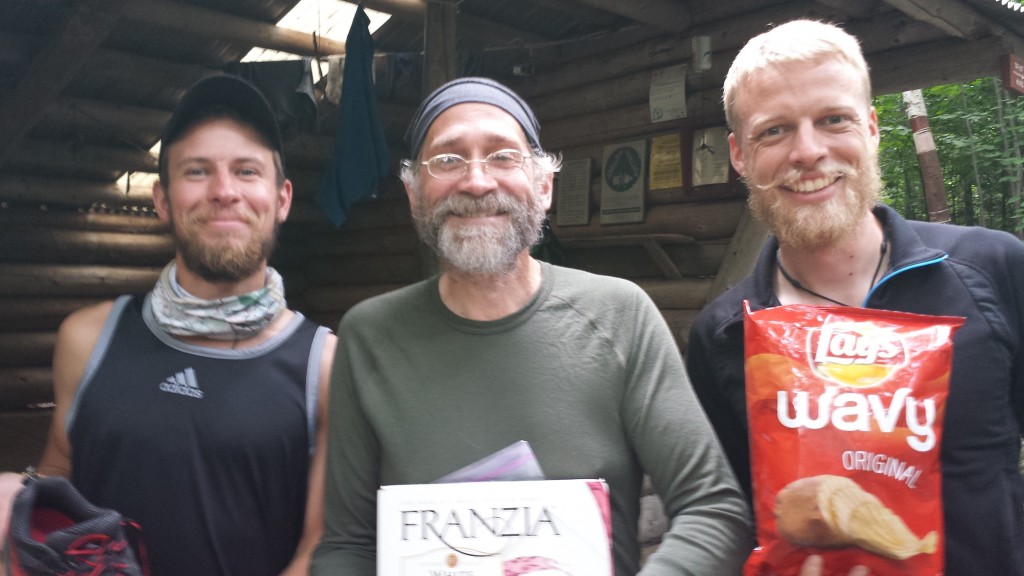 “Trail magic” is when some kind soul shows up on the trail or in a shelter with food and drink for tired, sweaty hikers. Here I am with John (left) and Hoff (right), two German hikers I met on the trail, after two women crossed a lake in a canoe to come to our shelter with brownies, cookies, chips and a box of wine. Best night so far at a shelter! 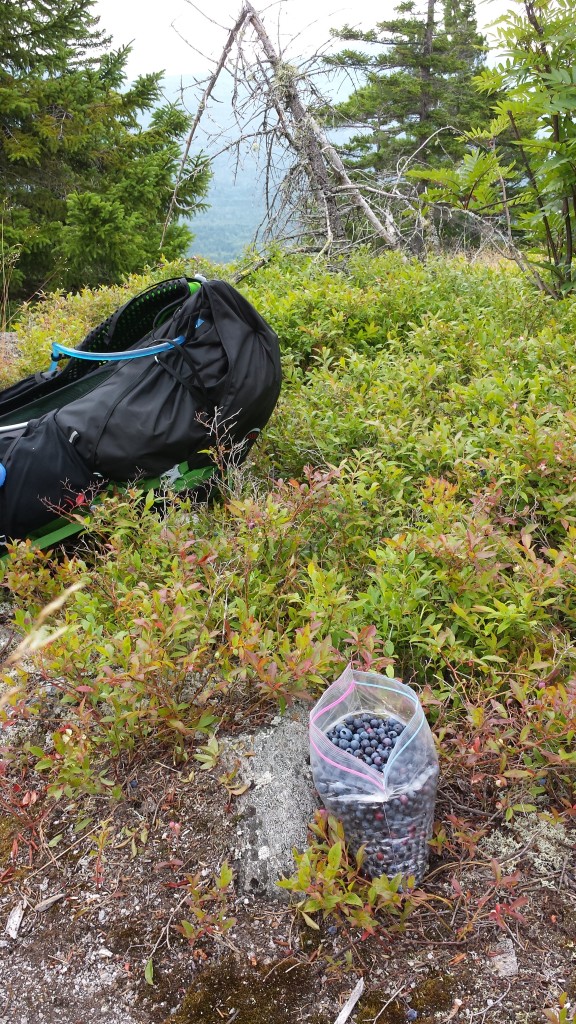 Most of the peaks I’ve summited in Maine are covered with wild mountain blueberries. I spent an hour picking these and ate the entire bag for dinner that night! 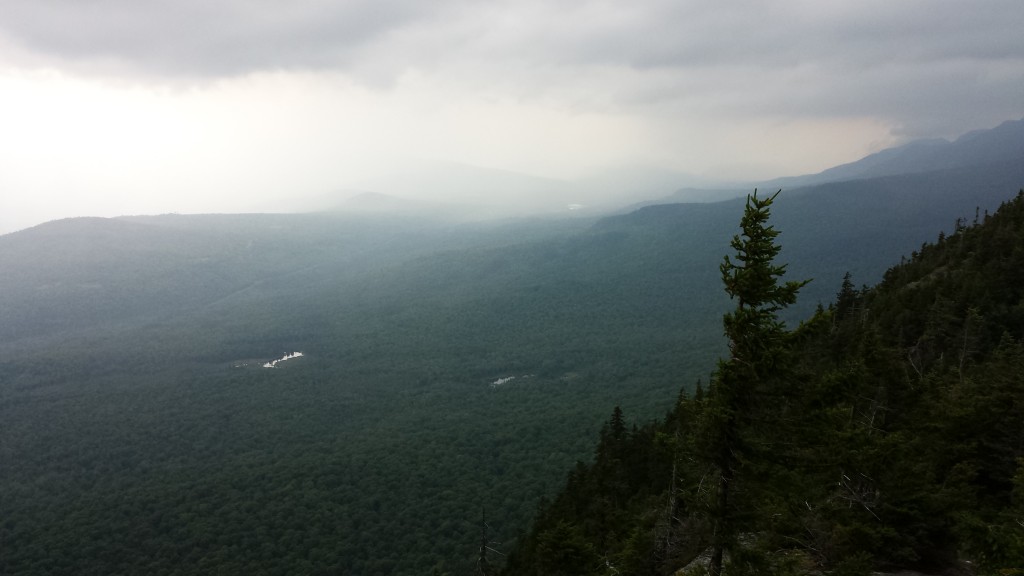 One of the many storms I got caught in during the past few weeks…this one from atop a peak. 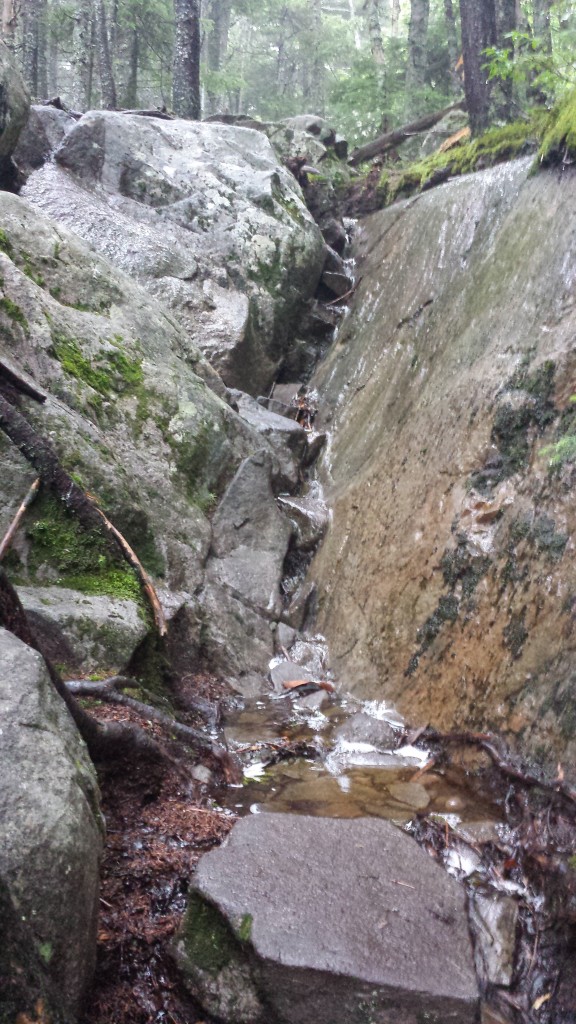 Nope- not a river…that’s the trail! Many such sections in Maine! 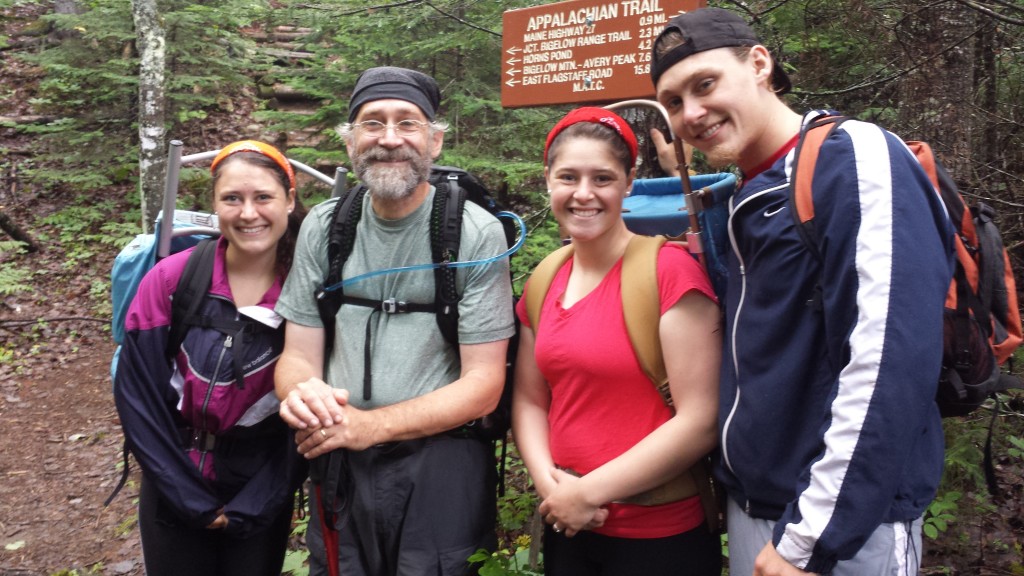 Three very nice siblings I met with their Auntie Mary Lou on the trail. From left to right: Theresa (planning her AT through hike for next year), Bethany and Richie. 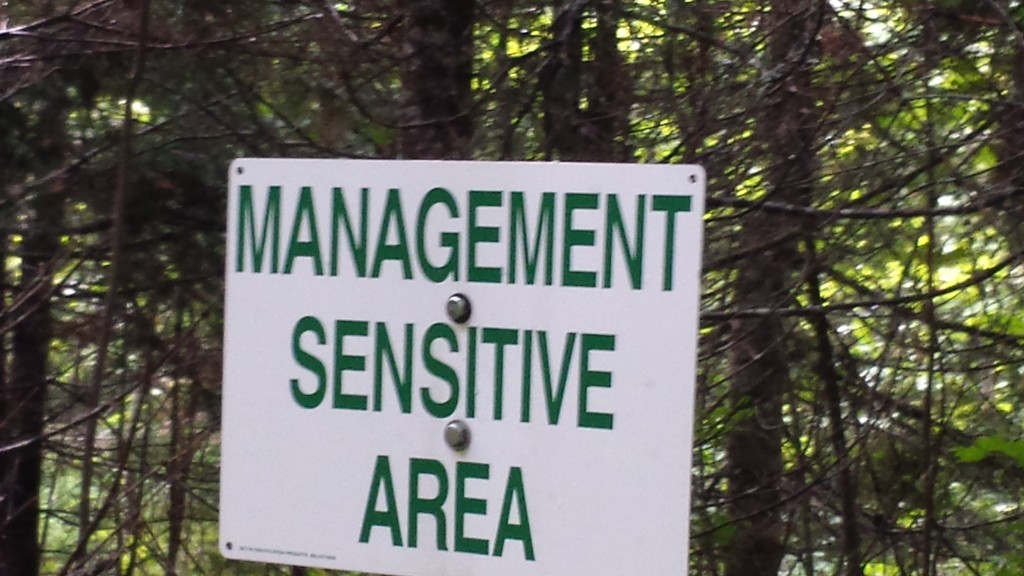 Hmmm…I think I’ve been in some of these before at work, ha! 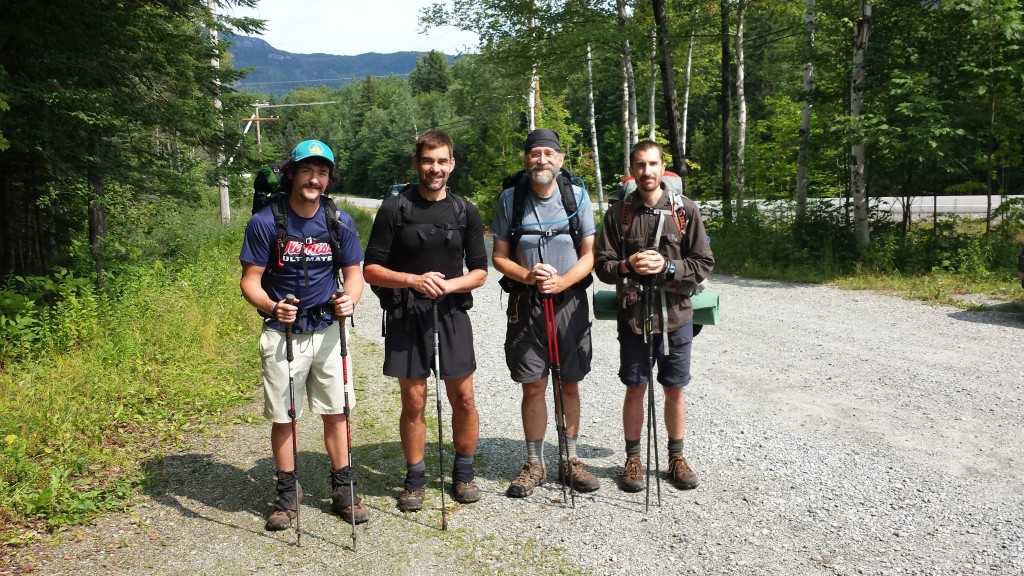 A few of the “Dukes” setting off for another day on the trail: Hero, Forrester Gump and Slim Jim. 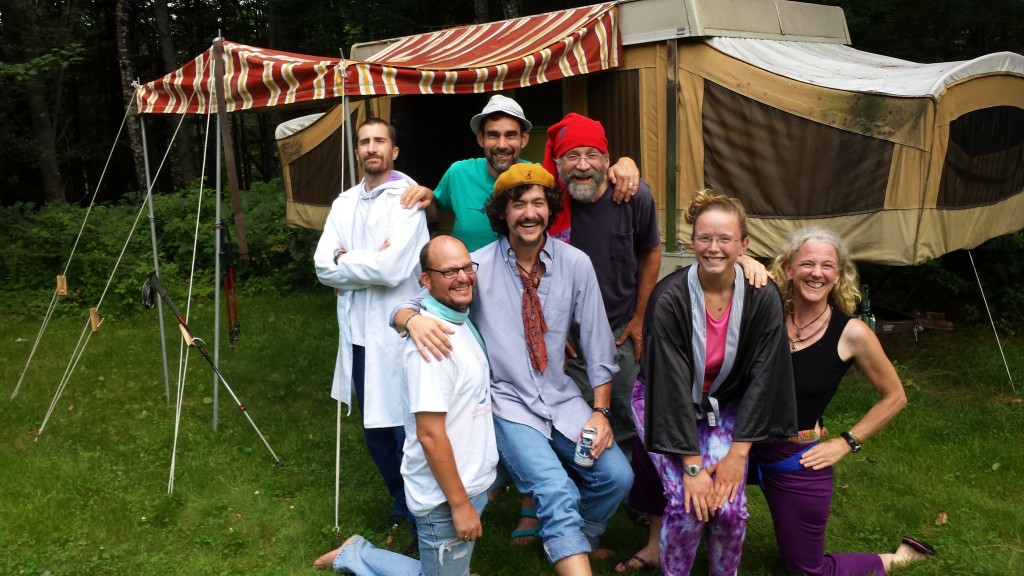 The Dukes clowning in clothes from the “hiker box” (dress up clothes you can wear at hiker hostels when you do laundry). From left to right: Slim Jim, Mav, Forrester Gump, Hero, me, Swish and Birdie! 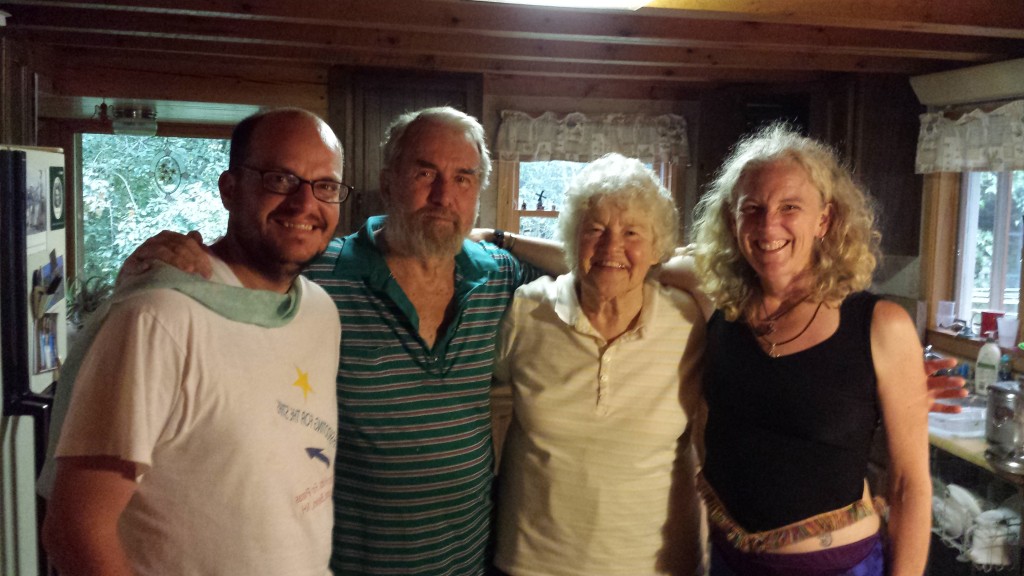 Mav and Birdie with our hosts at “the Cabin:” Earl (Bear) and Marge (Honey). Marge is 82 and has been cooking us amazing dinners and breakfasts every day, while Earl helps out in a million ways, including shuttling us back and forth to trail heads. 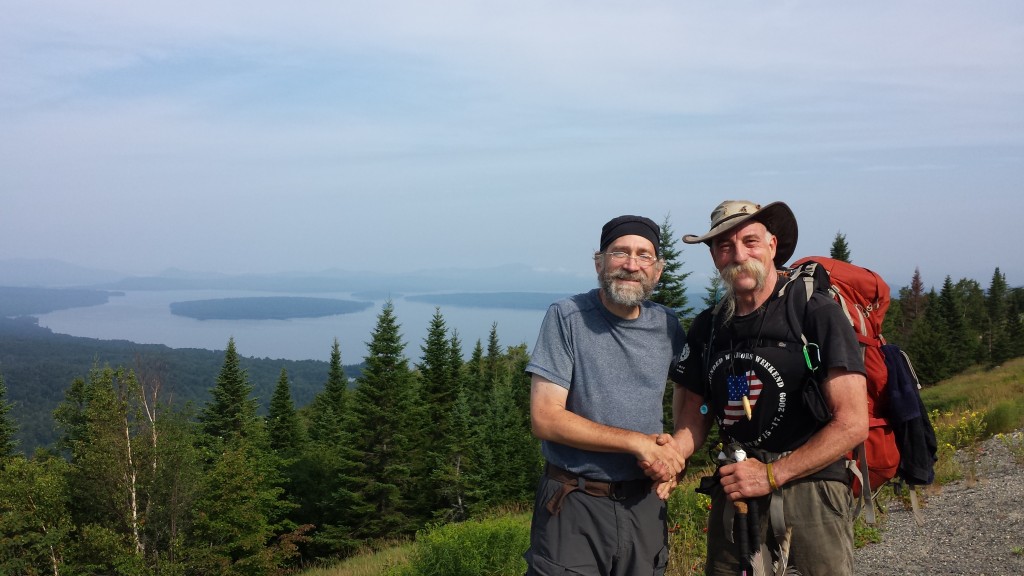 Me with Puma Ghostwalker, a hiker with his own show on National Geographic (see list of links on the right for a link to his info). 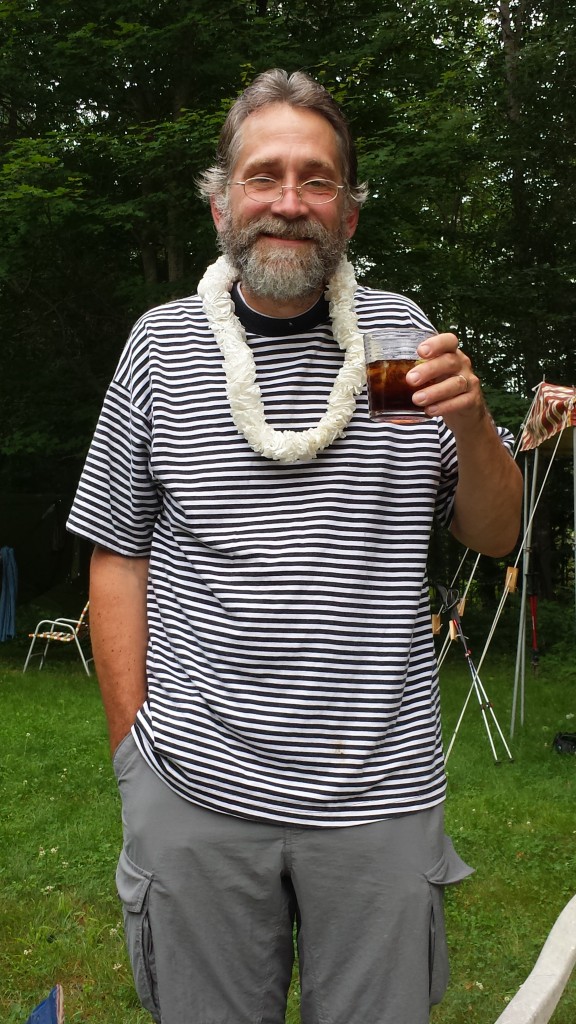 Nothing says the end of a long hike like a shower, clean clothes and an ice cold cocktail.