Since leaving Vermont I’ve passed through Massachusetts, into Connecticut, and will move into New York within 2 days of this post. The fall colors haven’t hit yet, but I’m seeing the occasional yellow or red leaf and it won’t be long before the views are fully multi-colored. The biggest news in the past week was that I spent some days away from the trail hanging out with my wife (Wendy), eldest son (Oliver), daughter (Emily) and her husband (Hamid)! Wendy and Emily came and picked me up in Salisbury, Connecticut and took me back to New Jersey where we spent 4 days together. We toured Emily’s campus, had a sumptuous Persian dinner at the home of friends and managed to get done a bunch of resupply and gear changes I desperately needed for my hike. Hamid is driving me back to the trail head in an hour or so and I’ll be hiking with new shoes, a new pack (same model, but swapped out due to rips in meshing), carrying some needed cold weather gear for the changing weather, etc. Wendy also washed out my sleeping bag, rain coat, etc. so gear-wise I’m feeling great! Wendy and I rented a car and drove back up to the trail in Connecticut and New York where we spent the day giving trail magic to hikers I’ve been hiking with/near over the past month. We managed to catch up with Birdie and Crow who also took stuff to hike into Mav, and we caught Hero, Hercules, Slimjim and Swish, Stringbean and Dirtybird and Weezy who was going to hike stuff into Chispa. It was a long day of driving around but well worth it!

Another highlight of Mass was staying at the home of Greg and Laurie. I met Greg and his dad a few weeks back on Mount Moosilauke. They are planning a thru hike next spring and later texted me to let them know when I hit Mass so we could meet up. Greg drove very far out of his way to pick me up and bring me back to their place, where they fed me like a king, did my laundry, etc. We had a great time chatting together, and then the next morning when he returned me to the trail head he spent the day giving trail magic to other hikers.

Lastly, I have a fun anectdote to share from yesterday, but it requires a bit of set-up. From my previous pictures, you can see I’m looking less like a corporate IT guy all the time. When I go through trail towns, they are very familiar with all the long hair and beards since most male hikers let it all hang out during their through-hikes. However, when I’m away from trail towns, I’ve started to see people relating to me very differently. The looks I get betray assumptions that I’m homeless, derelict, or worse, ha! So, fast forward to New Brunswick, New Jersey where Emily and Hamid live in an upscale apartment building downtown, right next door to the courthouse. Yesterday morning I had returned our rental car and Brian, the extremely kind guy who runs the local Avis office offered to shuttle me back to Emily’s place. As he dropped me off, I stepped away from the curb, said thanks and turned to enter Emily’s secure building entrance. At which point, two women passing by on the street motioned emphatically toward me and said “NO, THAT’S NOT the courthouse!” I politely explained that I knew that and they suddenly looked very embarrassed as I kept going in to Emily’s building, leaving them to realize that I wasn’t heading to court to face vagrancy charges (or whatever else they had conjured). As some of you know, we Gosheys love to turn expectations upside down, so needless to say I had a great time with that little exchange!

Ok…that’s all for now, but here are some more pix from the past week or so…enjoy! 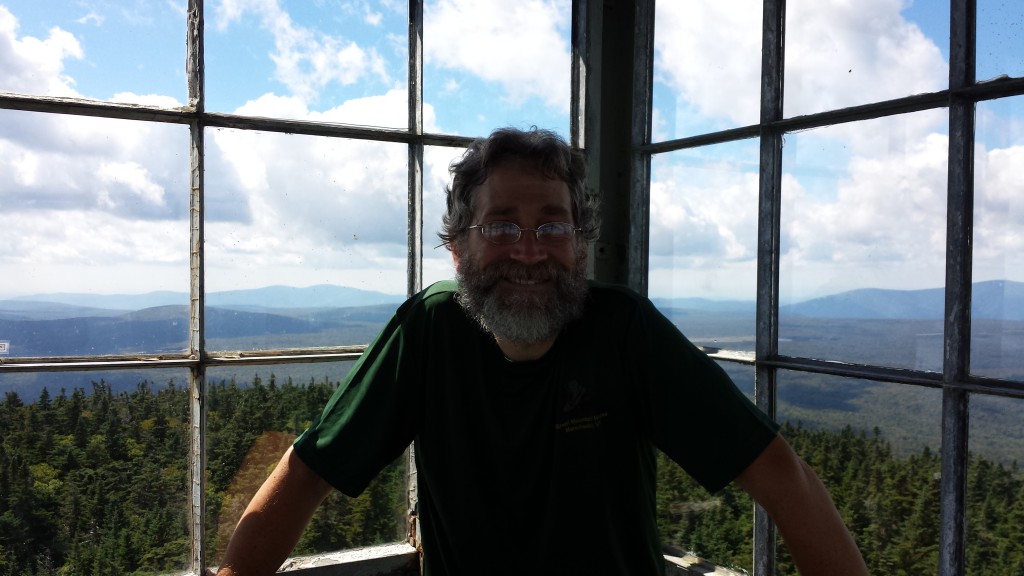 Atop a fire tower in Vermont…thanks for the picture Herc! 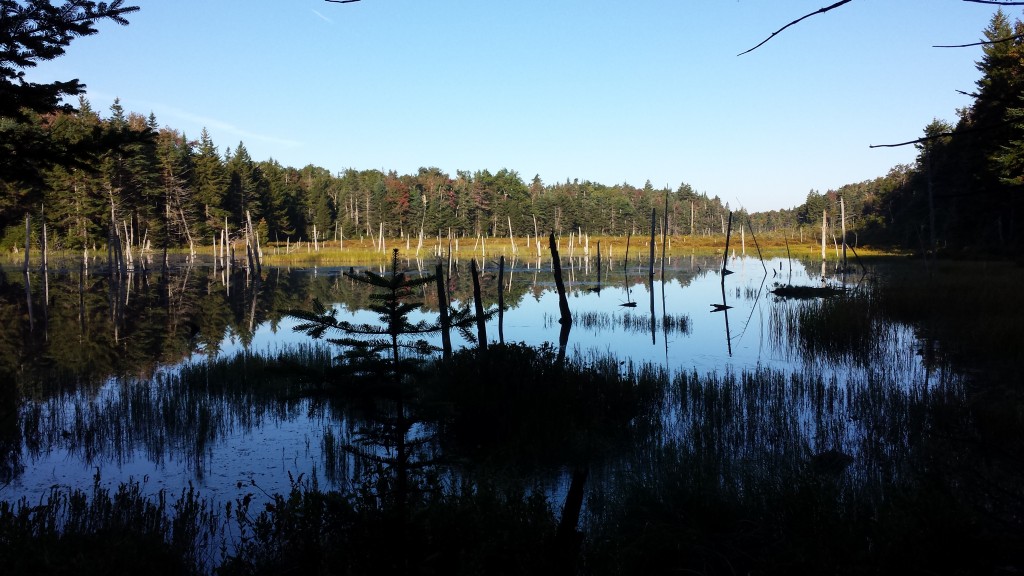 Serene pond on the trail 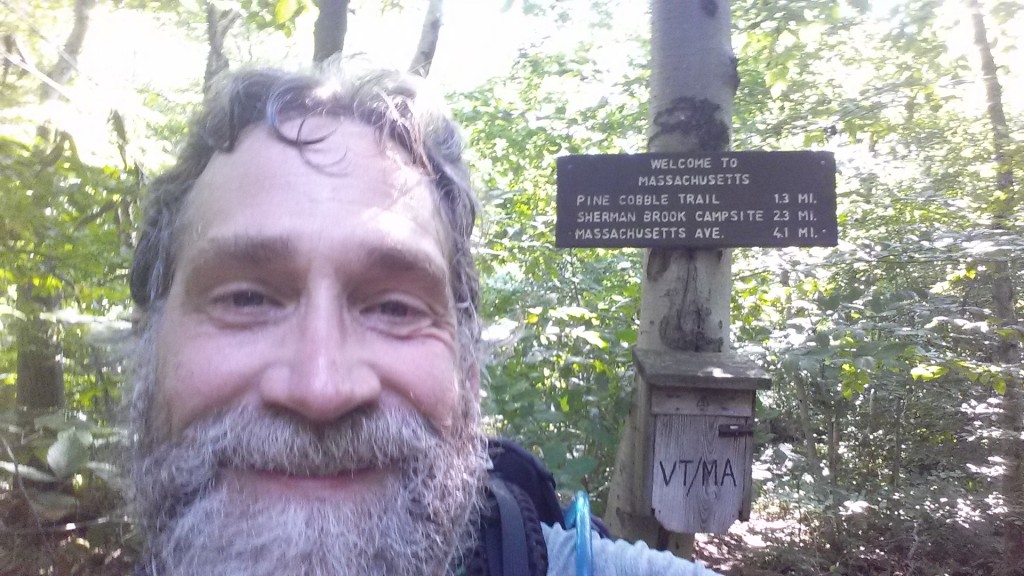 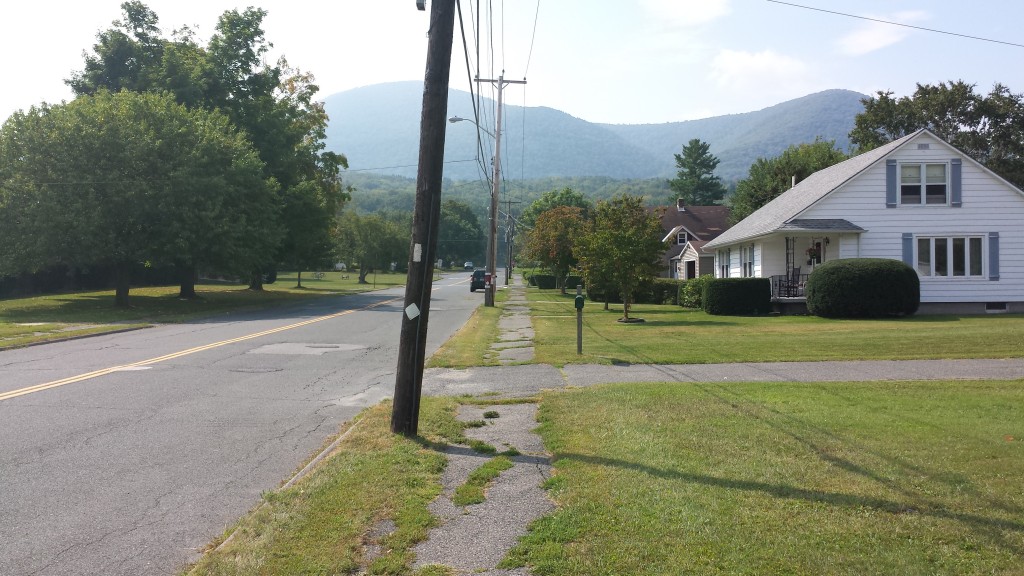 The trail in a residential neighborhood, near Williamstown, Mass 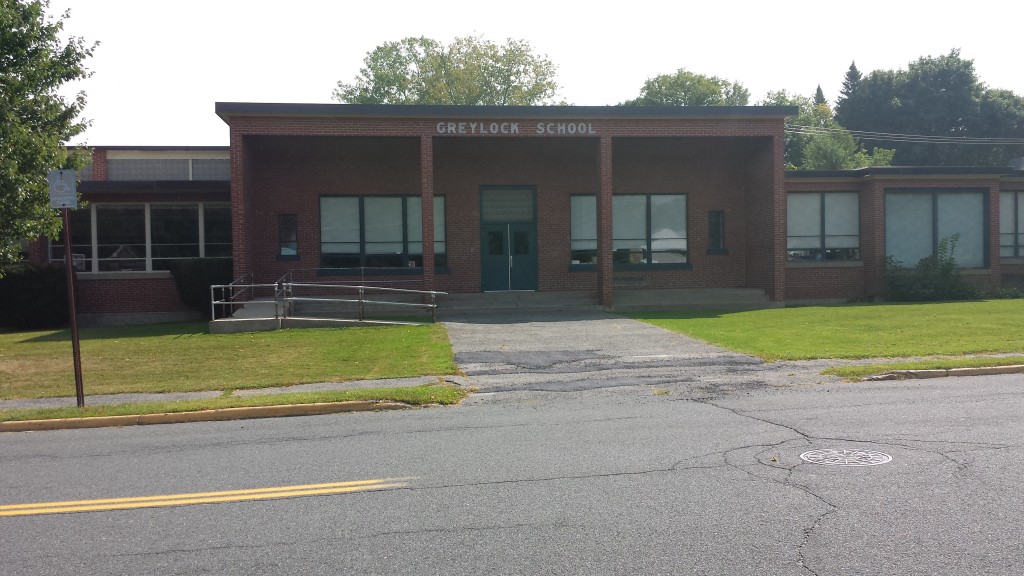 Must be cool to go to a school right on the AT! 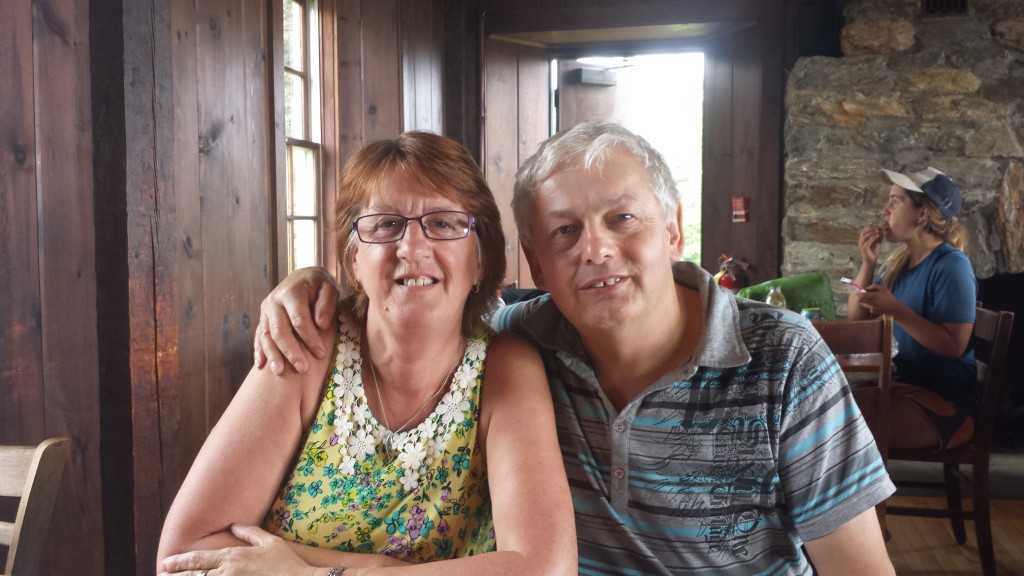 The Killans from Bolton, England…practically neighbors to Helen and Simon in Bury. They bought me tea in the lodge on top of Greylock. Chispa in the background having lunch. I hiked with her and Weezy for a day or two, but their 30 mile days were too much for my old man legs! 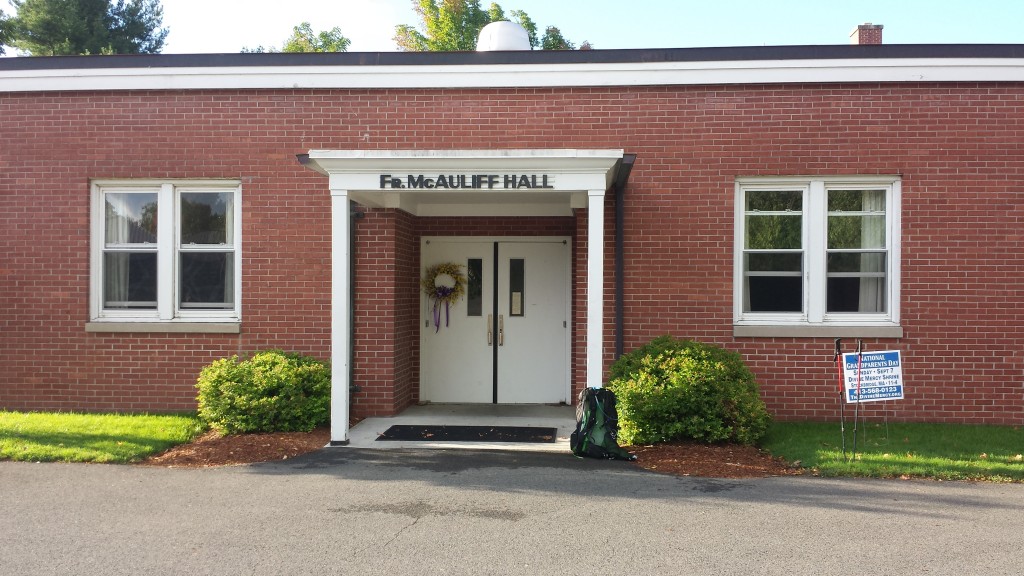 Catholic church rectory hall that let Chispa, Weezy and I stay for the night. Amen! 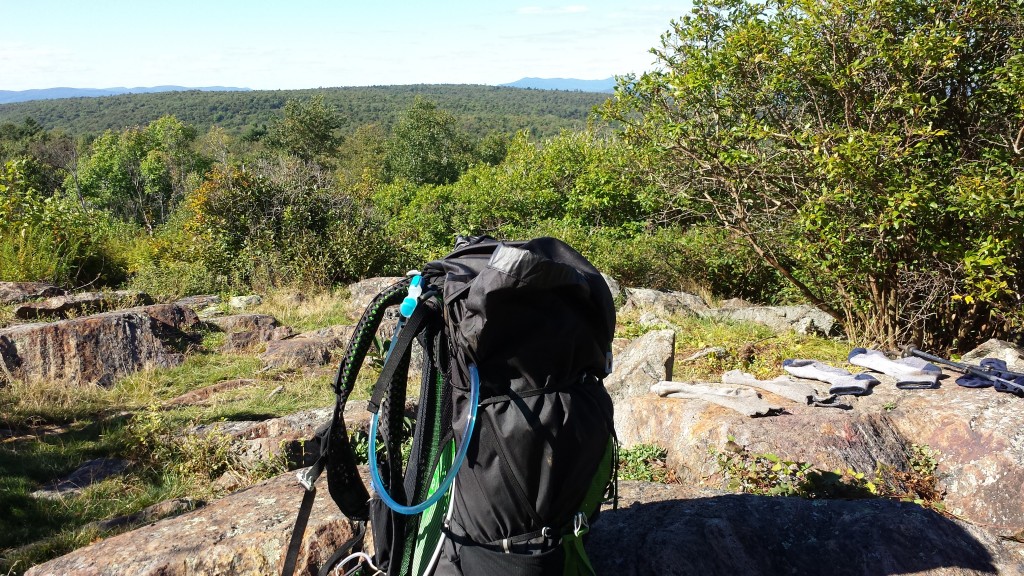 Pack off, socks drying on rock, me napping 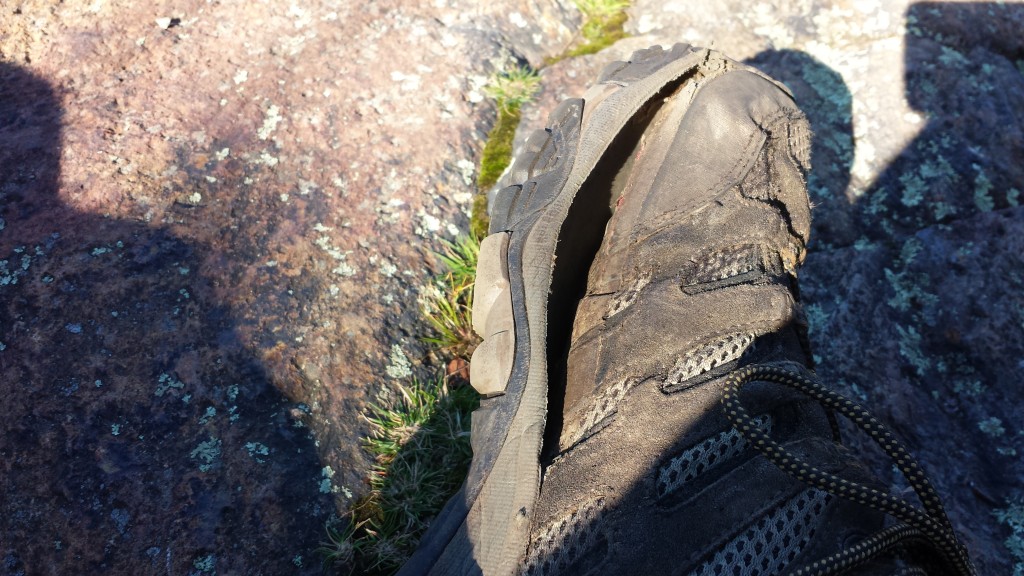 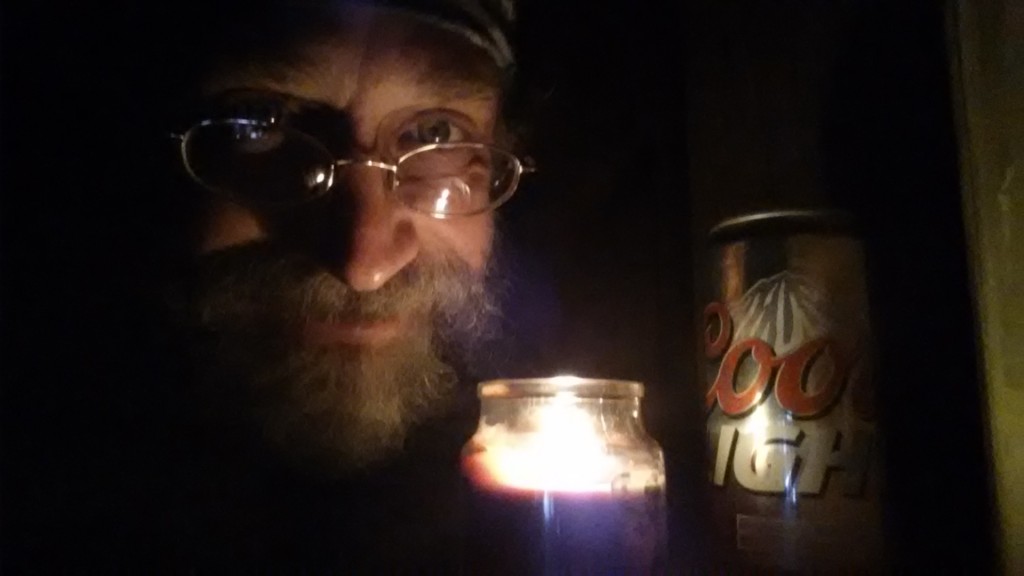 “I pulled in to Nazareth, was feelin’ ’bout half-passed dead…” Ended up alone in this shelter late one evening and found a couple of beers, water and a candle…magic! 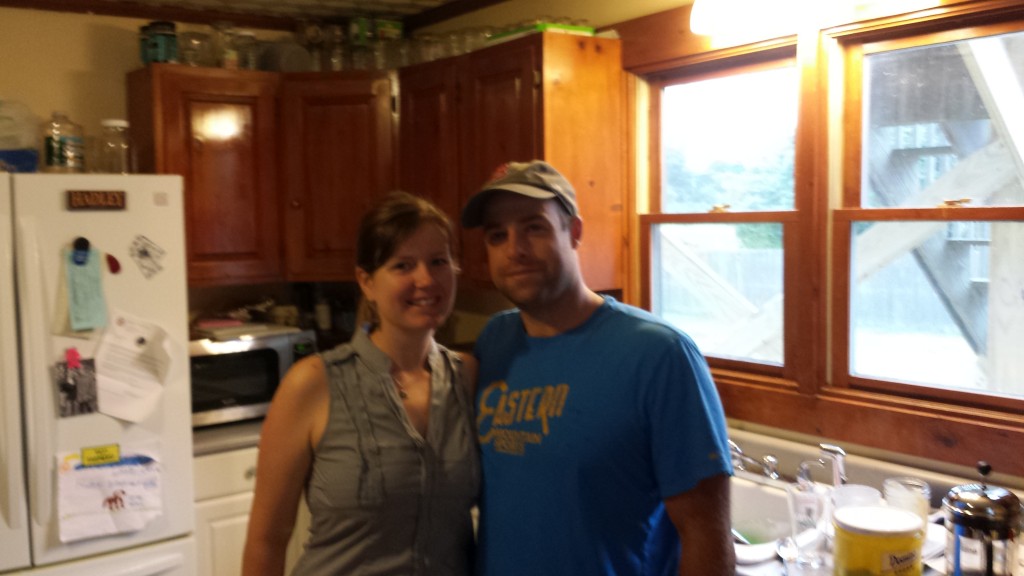 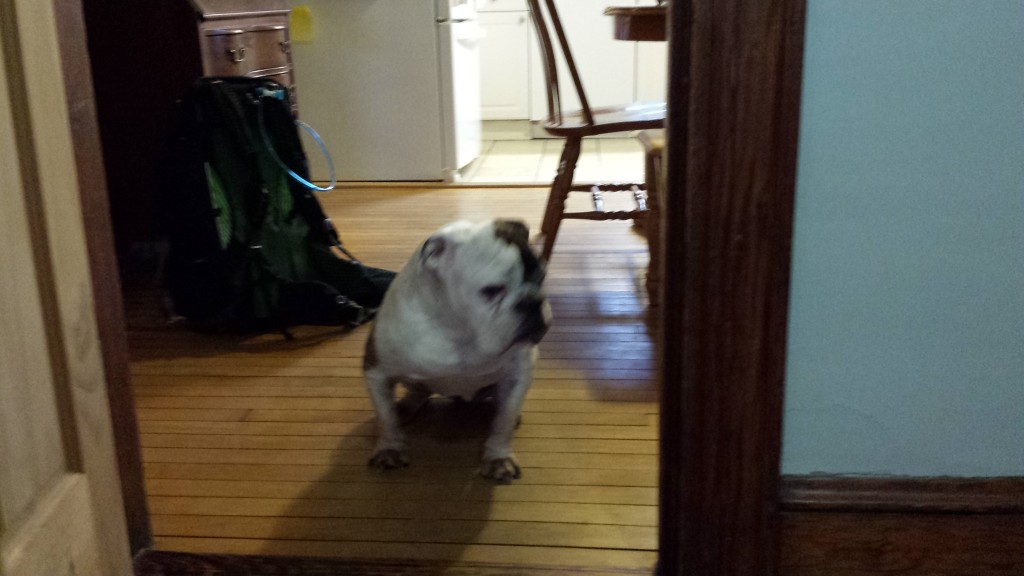 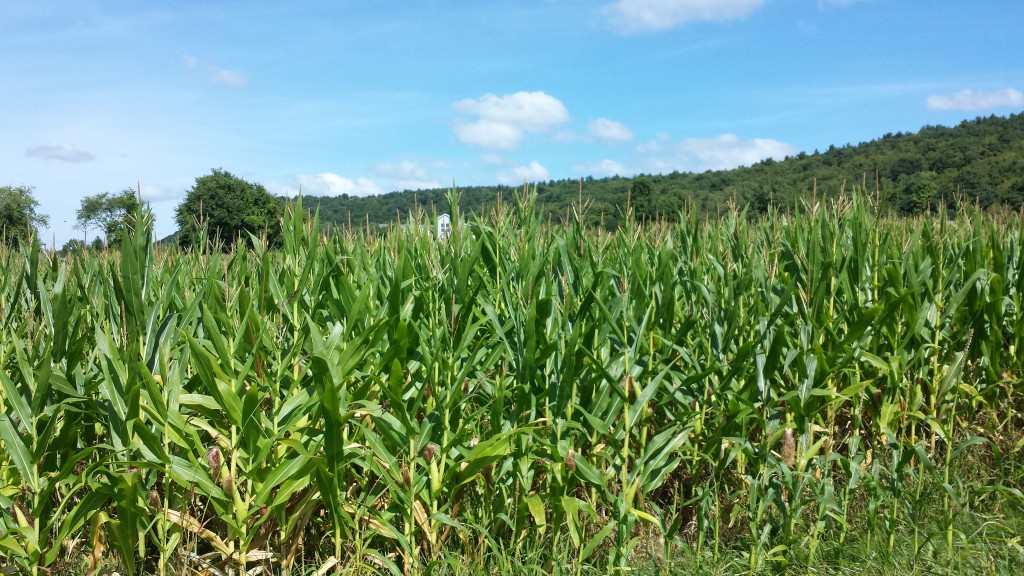 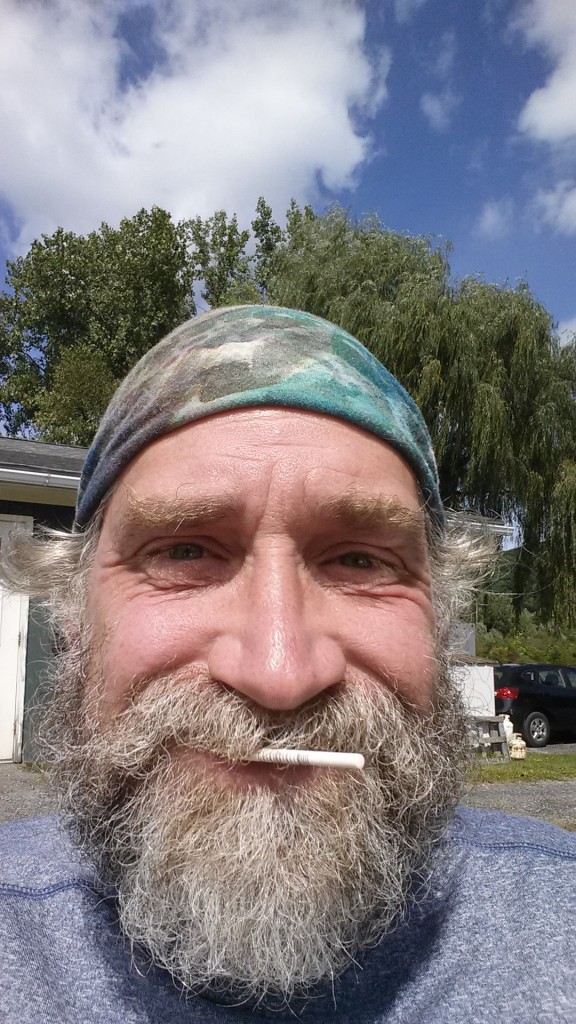 Post lunch tootsie pop on a roadside in Mass. 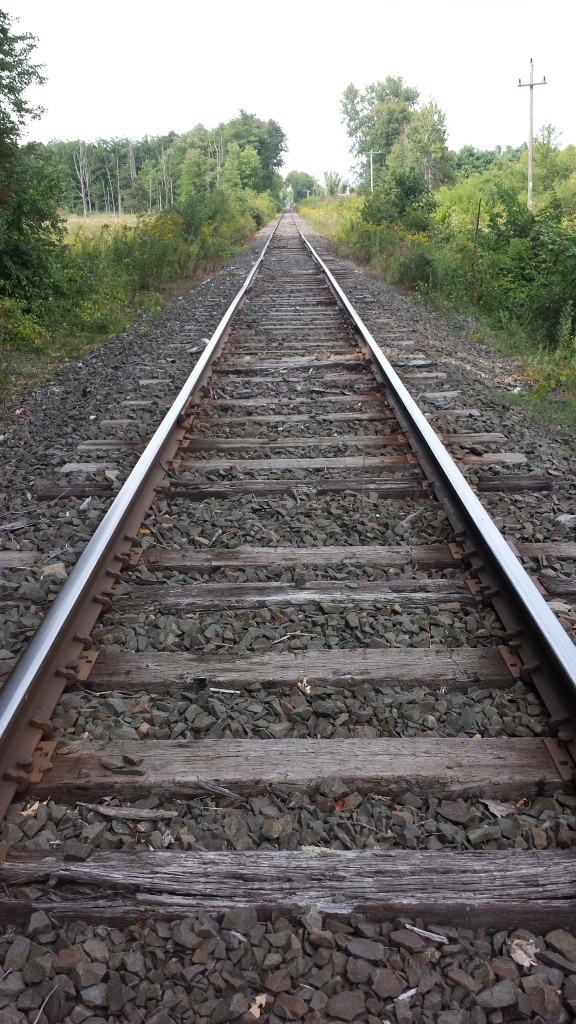 “I wish I was a headlight, on a northbound train!” Nice AT RR crossing 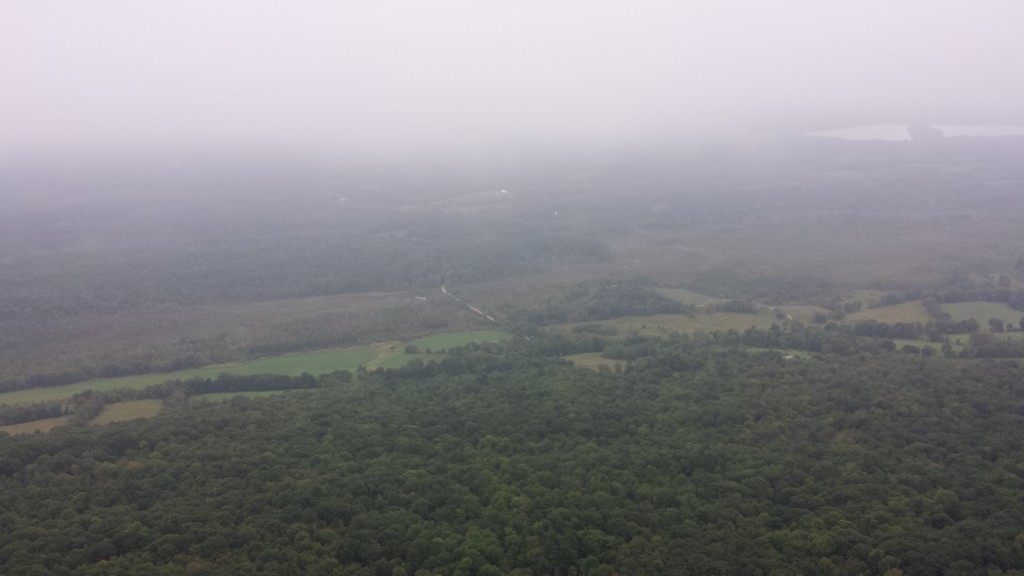 At times, the trail is definitely “Into the Mystic” 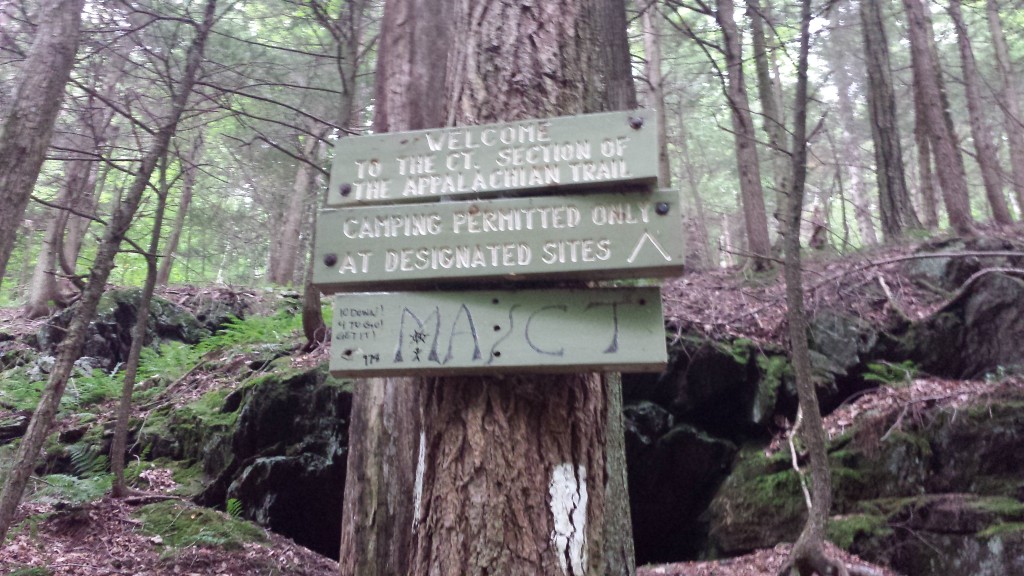 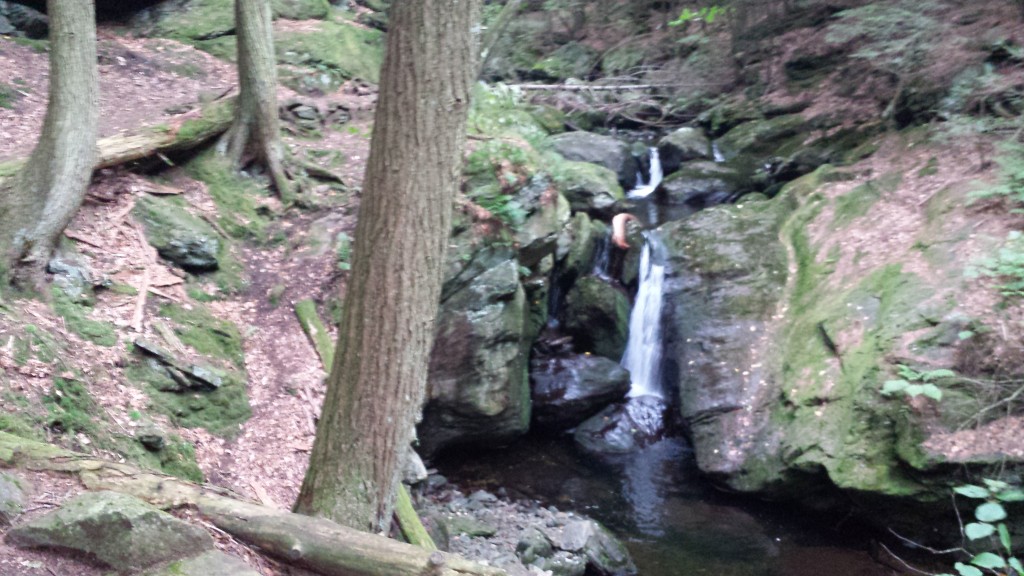 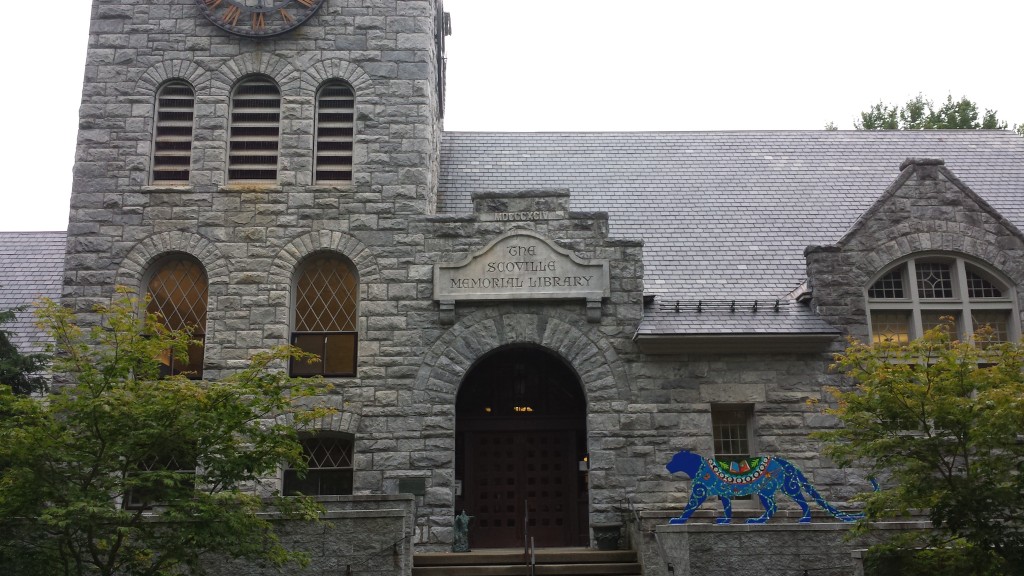 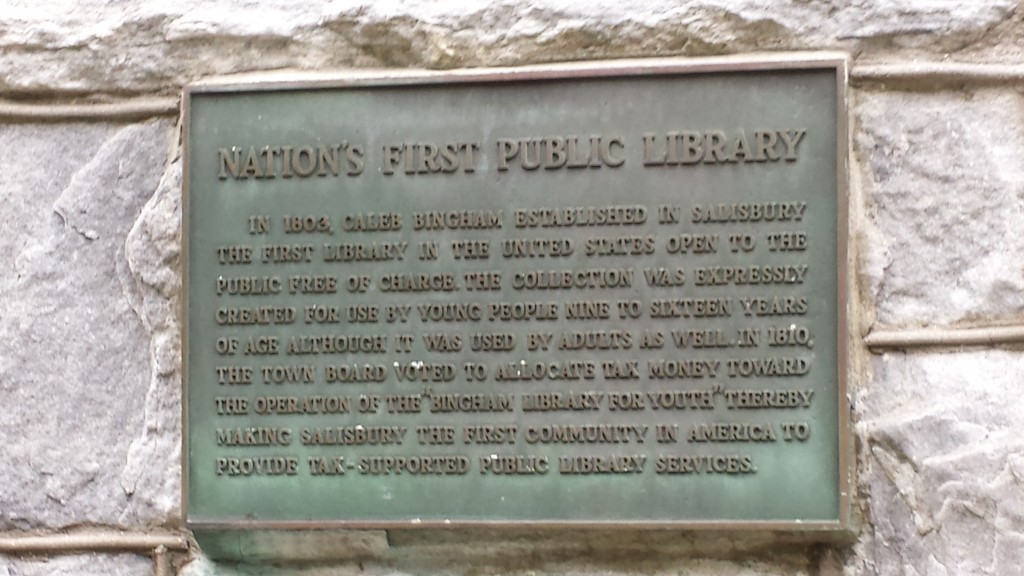 …which incidentally was the first in the country! 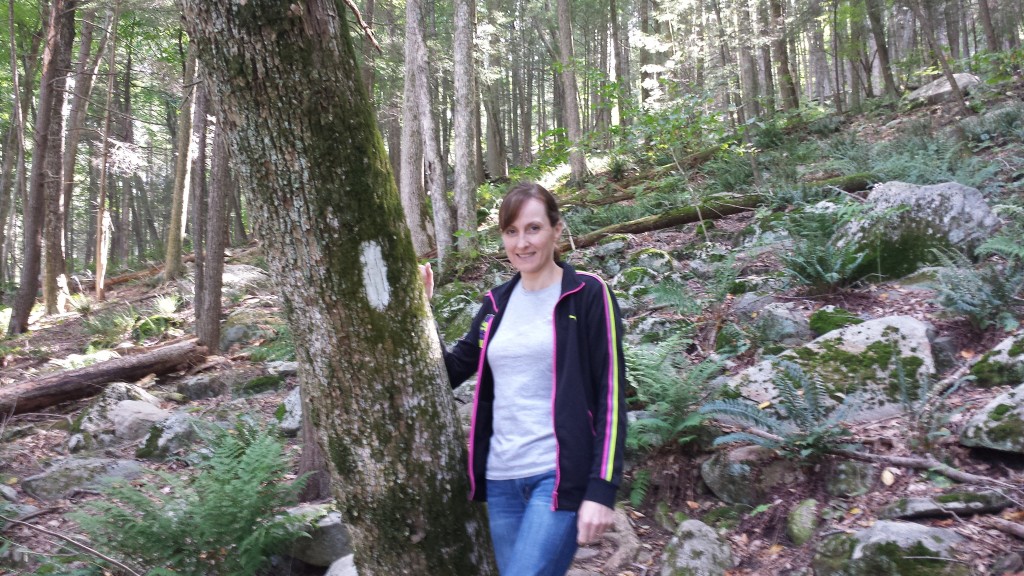 Not fair! Wendy’s only been out here a couple of days and is already miles ahead of me!

If Penny and Russ are still following, hat’s off to Russ for introducing me to this band (RailRoad Earth pre-cursor ‘From Good Homes’) who are playing down the street from Emily in December.

Crossing into Vermont has been magical. For example, on August 28th we started the day by saying goodbye to trail angels Short-n-Sweet and Greybeard who hosted nearly a dozen hikers at their home the previous evening in Norwich, sharing with us the story of their son’s thru hike which inspired them to reach out and help hikers. We left their home before sunrise in order to hit our 20+ mile goal for the day. Our first break that morning was the home of the amazing Hart family, who have already provided support to 950 hikers this year alone. As we walked by they rang the bell on their porch and motioned us in for a huge homemade breakfast. The roadway immediately in front of their home runs about 30 feet above a whitewater river. Among hikers there is a tradition to dare each other to jump off the bridge. Egged on by my younger cohorts, I took the leap in my underwear, on a belly full of the Hart breakfast (see video below)! The jump was a gas and the water refreshingly cool. The video was filmed by one of my very good friends from the trail- Hero (from Mississippi)- who then jumped himself.

From there, we spent the day hiking through 20 miles of mountains, forests and meadows, reminding me very much of scenes from the Sound of Music. As we were emerging from the woods to a paved road, trying to decide whether to push another few miles, a truck rolled to a stop and the driver asked me if I had ever heard of ‘the Barn.’ The Barn is a word-of-mouth free hostel in Woodstock, Vermont, hosted for 22 years by Daniel Quinn (trailname: Bad Example). It turns out that the driver of that truck was none other than Dan himself and he invited us all to stay in the loft of his barn. While we pitched in with some light chores, dinner was being prepared for us by trail legend (and Jerry Garcia look-alike) Baltimore Jack. He has hiked the complete AT an amazing 9 times, including thru-hiking 7 consecutive years. It turns out that he and Dan are old friends and he was coincidentally staying with Dan while we were there. Baltimore made us an amazing spaghetti dinner with a huge salad, garlic bread with salami, and for dessert we had homemade pie from the ‘Pie Lady’ who sells home baked goodies and home grown produce next door.

Fast forward to August 30th where we did another 20+ mile day and were treated to ‘trail magic’ 4 times throughout the day, including a food and beverage booth set up on the side of the road by Jen, a bubbly young grad student from California who is out here doing PhD research on the psychology of thru-hikers. Jen’s booth was located at the point where Sobo (southbound) thru hikers pass their 500 mile mark, so it was a great milestone for us to celebrate!

And for me, the icing on the Vermont cake is the place from which I’m making this post. The Green Mountain House– in Manchester Center, Vermont- has a reputation among many hikers as ‘THE’ best hostel on the AT. Jeff the proprietor keeps the place immaculate and as a hiker himself, is very in-tune with hiker amenities. For $25, you get a clean bed, free laundry and showers, free beverages, a free pint of Ben and Jerry’s, free make-your-own breakfast and use of the spotless facilities which include the computer on which I’m posting this update, a great hiker lounge with huge color TV and well-appointed kitchen. No wonder that nearly every hiker I’ve passed going in the other direction has recommended Jeff’s place.

Today is 9/2 and I’ll hit the trail again early tomorrow morning, my daily hiking average now well into the 20 mile range. I’ll cross into Massachusetts in the next 2-3 days and from there the states will start piling up as the terrain levels out. The pictures below are from the past few days…I hope you enjoy! 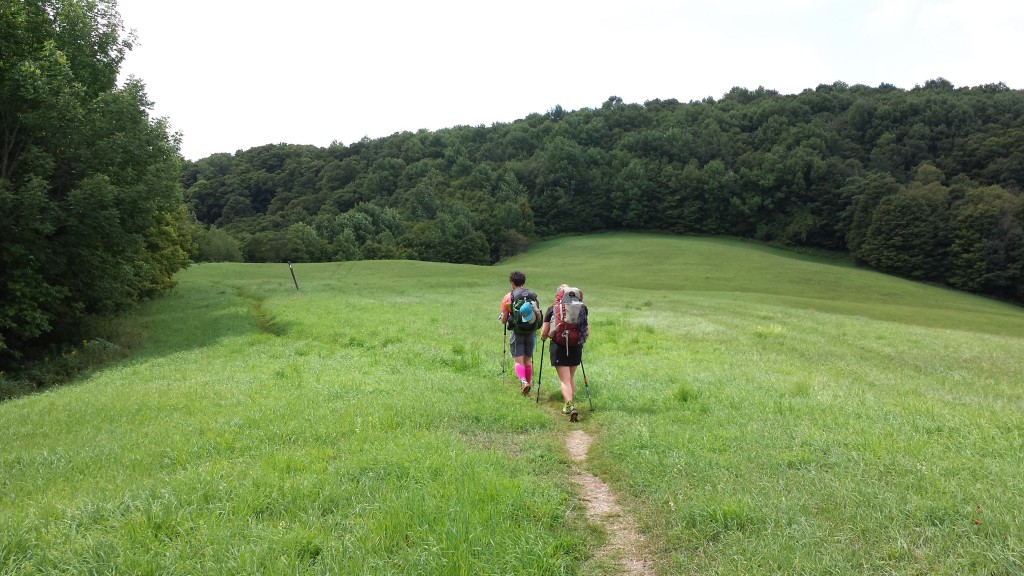 Hero and Swish in Vermont, in what could be an Austrian meadow. 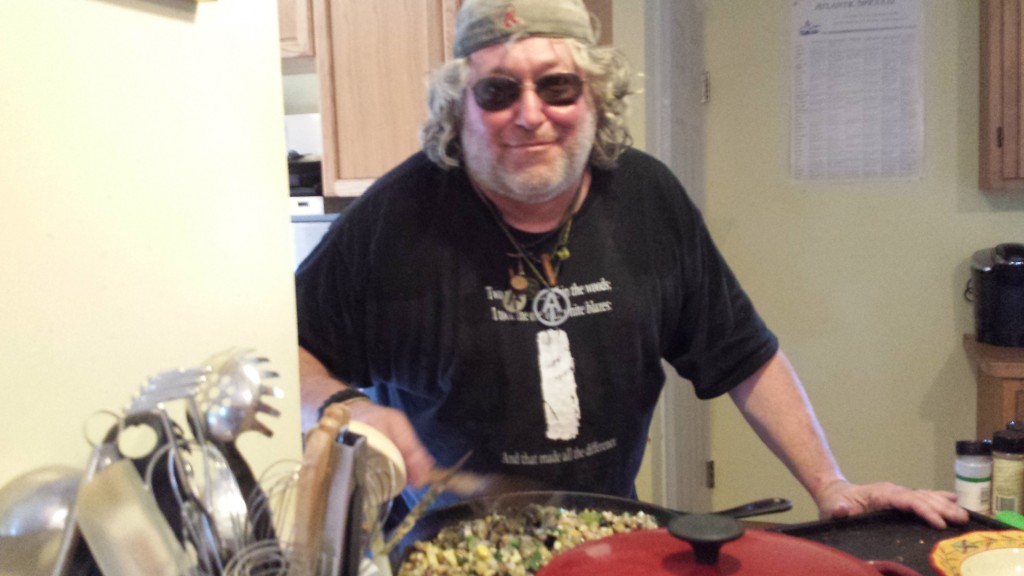 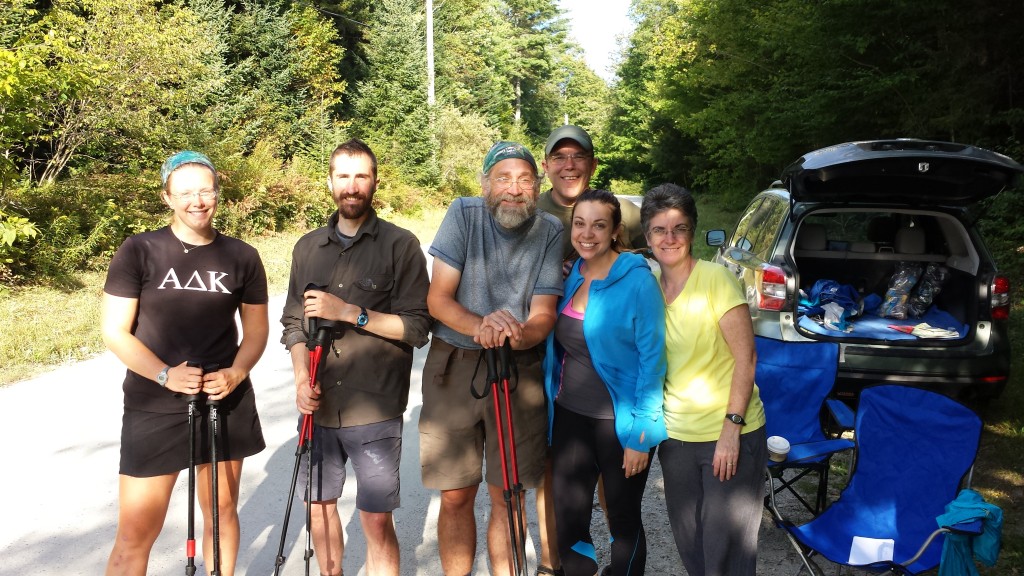 Grad student Jen (in blue next to me) with her aunt and uncle, providing trail magic and lots of smiles. Swish, SlimJim to my left) and I hit our 500 mile mark right at this spot! 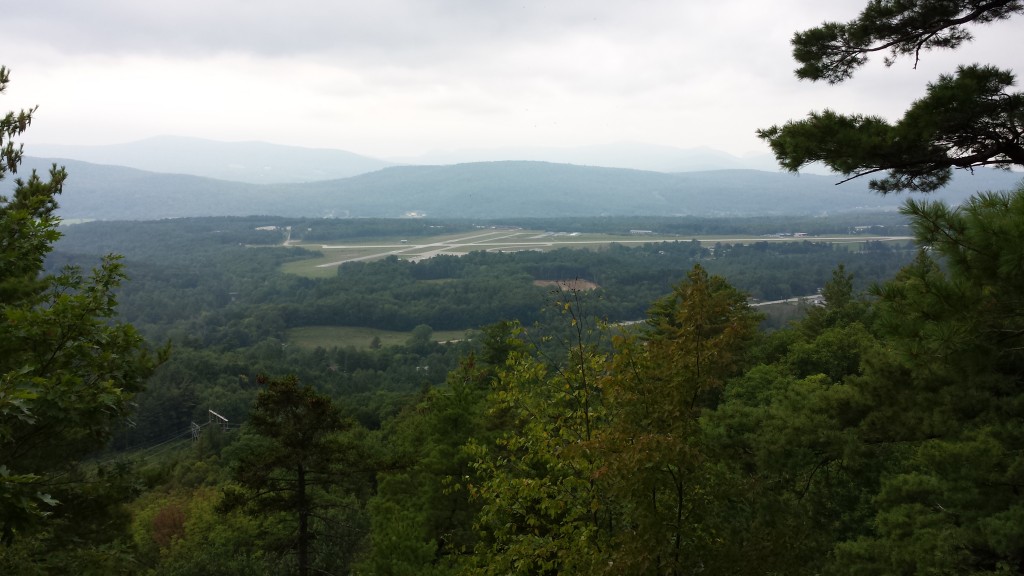 The trail as it overlooks the Rutland, Vermont airport 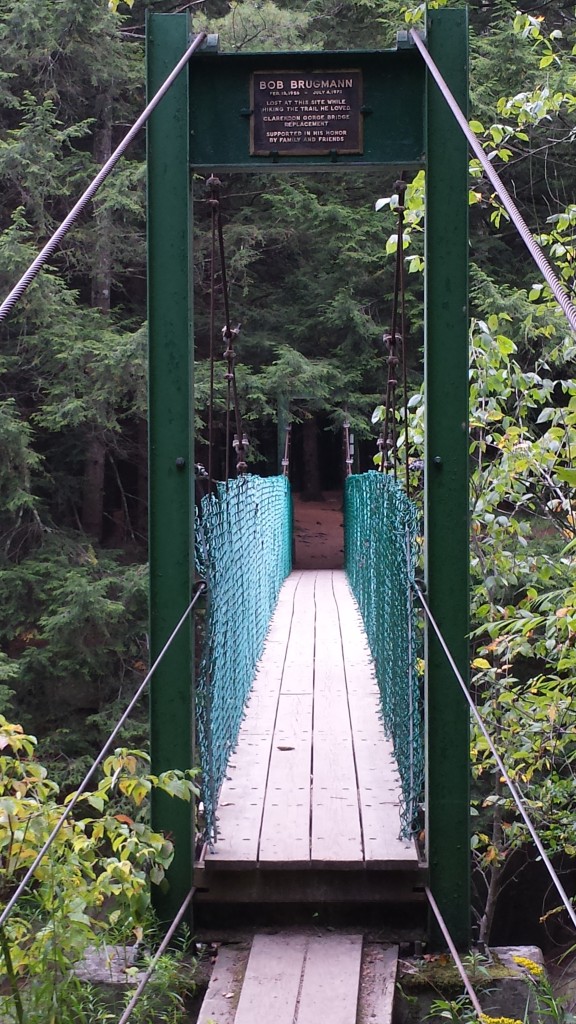 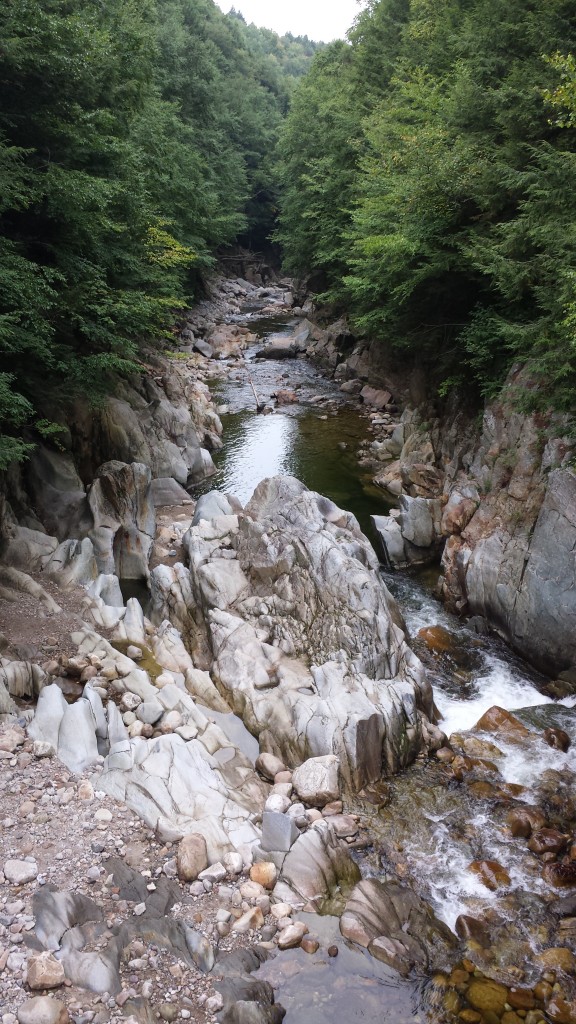 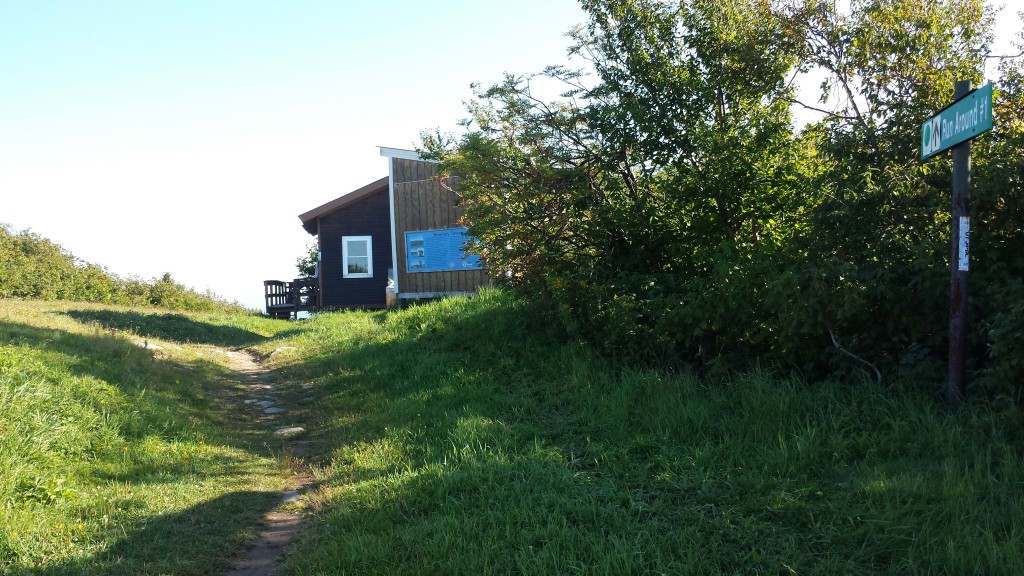 The AT passes right through the Bromley ski resort. Per the sign, the run we hiked down is called ‘Run Around.’ I was just grateful it wasn’t a black diamond! 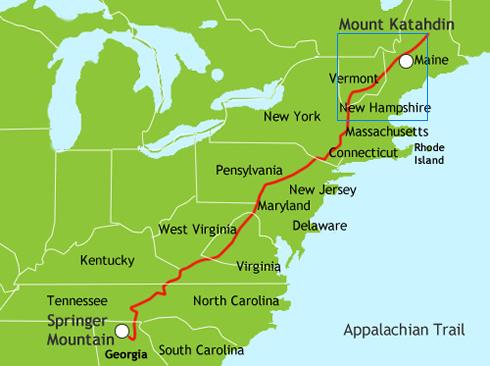 AT map with a blue square marking (approximately) what I’ve completed so far.”And miles to go before I sleep…”